This large international event is fruit of the agreement reached by the Association of Free Technologies and Open Knowledge Companies of the Basque Country (ESLE), promoter of the previous Bilbao Librecon Congresses in 2014 and 2016, and CEBIT, recognized as the main global technological innovation fair held in Hannover (Germany) and led by the prestigious German professional congresses and fairs organization institution, Deutsche Messe. 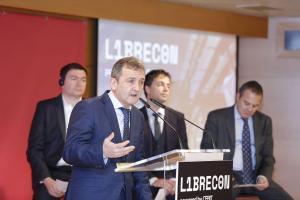 The first of the two events covered by the agreement between CEBIT and ESLE will be held on 21 and 22 November 2018 in the Euskalduna Conference Centre and the second in November 2020.

The alliance was signed today at an event held in the same place that will host the event by the president of ESLE, Eneko Astigarraga, and the vice-president of CEBIT, Marious Felzmann, and witnessed by the ASOLIF president, David Olmos, the provincial councillor for Public Administration and Relations, Ibone Bengoetxea, the General Manager of Bilbao Ekintza, Nora Sarasola, and Aitor Cobanera, the SPRI Director of Technology and Innovation. All institutions that have shown their support for the agreement.